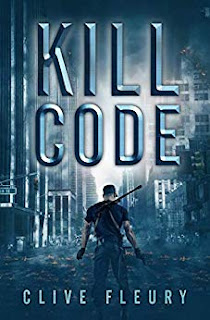 When I was reading this novel, I could sense a slight resemblance of few Hollywood movies (which I do not want to name)  with this story line. However, I can very well say that this novel offered a complete different approach in the end. Initially, I thought that I could tell you the story in just two lines but the sudden turn in the events during the midway of the story made it a unique one.

The story is set in the future. The story revolves around Hogan Duran, Ruby Mason, Jake Teerman, Max, Beecham, Jerry Anderson, Gen Stoker, Sandman(I guess I covered almost all the characters here). During this time, only the rich could afford good food and other facilities. There was this faction called Krails who had been a constant threat to the law and order of the region. However, their threats were nullified by NSC(National Security Council).

Hogan, who has served in the army earlier and also as a cop had to resign from his job but that did not deter his ambition to apply for a job in NSC. He along with other candidates like Ruby and Jake had to go through various vigorous tests for the selection.

Who among these had made it to the list?
What was their profile?
What did NSC do, in general or otherwise?
Where did they get their funding from?
Who were these so called Krails and why were they on loggerheads with NSC?

Read this novel which promises you of unexpected twists in the tale coupled with rage,anger,treachery,conspiracy which has been blended on a right proportion coupled with science fiction element added to it. This makes this novel, a compelling read.

First time I am visiting your site. I found so many entertaining stuff in your blog, especially its discussion. From the tons of comments on your articles, I guess I am not the only one having all the leisure here! Keep up the excellent work. So I am regular user of this site. All the stories you shared here are interesting and excellent. It helps to boost the knowledge. Thank you so much and please keep sharing such informative post in future.