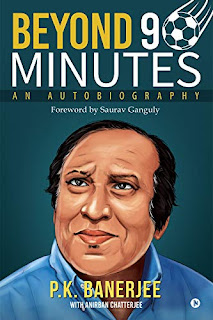 Before I could start writing my review about this book, I must make an honest confession. I wasn't a keen follower of Indian football and I hardly knew the name of the achievers. All I knew were the likes of Vijayan, Baichung Bhutia, Sunil Chettri but hey, you must also know that by the time I was born, many of the legends - at least in the Indian football has pulled off their boots. Having said that, I must also admit that I had hardly watched other tournaments like EPL,UEFA CL and others. However, I was a keen follower of World Cup football. I was a hardcore supporter of Argentina and I  cried literally seeing Maradona cry after losing that edition World Cup to Lothar Mathias led West Germany(Yes, Germany wasn't unified in 1990). However, my allegiance shifted its base to Brazil which eventually won the World Cup in 1994 and surprisingly, I knew all the names of the 11 players who played in that brilliant team.

Now, coming to my review. When I finished reading this book, I was dumbstruck as I came to know that we too had a legend who we could proudly put on par with the world class top players. Yes. The legendary P.K.da as he is fondly called has lived and living his life till date breathing only about one sport - Football. The book has captured the essence of his feelings and accomplishments in his truest sense. Though he could very well boast about his achievements in the sport, he did not do so but has brought out the book which was brilliantly written by Anirban Chatterjee as was told to him by the legendary footballer.

Not all becomes a legend. A person becomes one, when his action speaks more than his words. I am sure that he is surely a name to reckon with in the game of football and those who are from his State and the other State which produces footballers would still be hailing him as their inspiration and this book is a fitting tribute to the same.

The book talks in great detail about the life and journey of P.K.Banerjee as to how he struggled and suffered when his family had to shift its base during the partition leaving aside all their properties which put them on a spot but he was lucky to have had a supporting Father, caring Mother and later joined by his Wife Arti who was doing both, in the absence of his parents. The book would make you cry, feel proud of what this man has done for the nation and how he put "Nation First" even though he had to go through some testing times. His rise to the fame was very well captured in this book and so as his retirement days, equally.

He has given credits to his mentor Bagha Shome, Rahim saab and talked extensively about Neville(who holds the record till date of scoring the only hat-trick in Olympics for India & joint Golden Boot winner in 1956 Olympics), Chuni, Balaram, Kittu, Sailen Manna, Aziz, Mewalal, Ahmed Khan and Sattar. He talks about how he was deprived of 6 goals to his credit in a tournament. You read it right. It was 6 GOALS. Running 4 miles a day isn't easy as it sounds but P.K.da did it during his hey days.

He has given so much of information through this book as to how he was referred by the then Prime Minister of Malaysia who wished his country had produced at least one P.K.Banerjee during the Asian Games Awards ceremony. He also had a mix of his humor when he talked about how he lectured about cables to the M.D. of Nicco Cables which controlled half the world market by then.

His better half was awarded a Certificate which was signed by Sepp Blatter and Antonio Samranch (FIFA & IOC) which acknowledged her contribution to the Women Football. Now, where wuld you see a couple like this?

1. Do you know India has qualified for Football in Olympics for 4 times consecutively?
2. India drew with mighty French football team in Olympics?

After reading this book, I so wish that India produced more legends like P.K.Banerjee which would have put our Country in the limelight. I wish that day would come, sooner since this book would inspire a minuscule, if not many. Considering our population, this minuscule would easily run into millions which is sufficient enough to produce many football legends in the coming days...