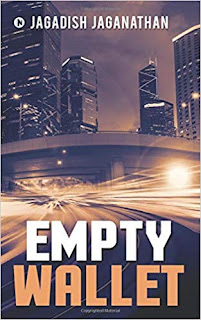 To start with, I would say that the title is very appropriate to the story and the cover page adds more weightage to it.

What does the title signify?
Is the protagonist bankrupt?
Has he been robbed/looted?

I had the same set of questions just like you on my mind when I saw the title and started reading the book. Ezhil Kumaran, the hero of the story starts his life just like a normal person. His single father raises him with much care and despite securing 55% in his BBA, he struggles to find a job. It is then he meets up with Deepika who was charming and was placed well in a job consultancy firm. He falls in love with her and it gets reciprocated.

He had a closed circle of friends Karthik, Shiva and Krishna. While Shiva ditches Karthik in his love life, they were connected with Ezhil in one way or the other. At some point of time, Karthik, who was founding partner of their company EZ Corp had to part ways with Ezhil.

Why and what made it happen?

Ezhil also had a dark past where he gets dragged into unnecessary controversy.

What was the controversy?

Despite all these setbacks, Ezhil emerges victorious in his business despite some dark forces trying to pull him down.

Who were they?
Why did they do it?

Though this book isn't a thriller, it very much qualifies for one - at least in some places making it an interesting read :-)