Book Review - Knock Knock I Am Your Anaesthesiologist 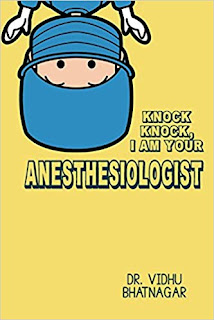 The field of medicine has always fascinated me. Though I was allergic to biology/chemistry/physics which comes under the broader classification of Science, my family has had its own share of Physicians with one of them serving as the HOD/Dean in Madras Medical College in 70's and my wife's cousin is a Doctor herself. Having said that, I too had my own notion about Doctors to some extent. Those were 80% positive and 20% negative. The positive ones were attributed to my family physician who was always kind enough to diagnose me when ever I fell ill and to my knowledge, despite giving the best of treatment and priority access by jumping the queue, he has never charged my father. He passed away when I was little over 10 years. I had my first experience of being sedated and going under the knife when he performed an operation which is still evergreen in my memories.

I always thought about why and how an anesthesiologist gets paid well though I had a faint idea about their job description and was pretty much convinced after I saw my mom being treated for her decayed tooth under an "Induced Anesthesia" since she expressed her concern of not able to tolerate the pain. She was not completely asleep and was in half sense responding to the Anesthesiologist as and when required. I then understood the complexity of the procedure to some extent since I knew that it would either make or destroy the life.

This book is a perfect compilation of sequence of events which has occurred in the life of an anesthesiologist and to a person who has not embraced science, would serve as a ready reckoner as it has captured the step by step procedure of what goes into making a professional in this highly risky procedure.

I was initially worried about not being able to cope up with the content but I was in for a pleasant surprise when I started reading the book as it was a free flow. Author has not used the complex medical terms unless the context required and these were explained in simpler terms.

I was fascinated by the types, the procedures, the presence of various equipment and what sort of care needs to be taken throughout which were explained in detail by the author in an easy and understandable terms. I bet there couldn't be a much better book than this to decipher the subject/field. While we only look at the monetary compensation that these professionals are paid, this book makes one understand as to what sort of risk, they themselves have to take or vulnerable to.

This 30 chapter book has captured the essence in a nut shell on little over 130 pages though it took more than a decade for the author to gather such an everlasting experience.