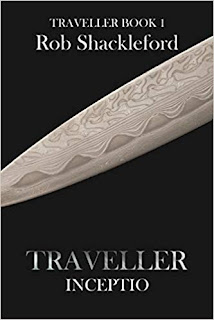 
This is one of the amazing novel I had read in the recent past. When I finished reading this novel, I felt as if I have watched a Hollywood movie which never fails to impress a hardcore sci-fi fan. The novel runs about close to four hundred and fifty pages but you would never feel bored at any given point of time.

Phil, Yeti, Allen, Craig and Mel were into research. They get funded my Melguard whose owner was none other than Mel's father. They were under the supervision of Dr John Crowley while Dr Jackson was their Dean. They ended up inventing Transporter and the story begins from there.

The novel has two stories running in parallel. While the first one was mentioned in brief above, the other story was about Michael who kills a wolf and starts running towards a forest. He meets a monk named Oeric and his fortunes turns around drastically. He was addressed as Lord Michael.

Though I felt the story was bit stretched,all I could say is, "It was justified". The plot was real good. Though we have seen or read stories similar to his - on the screen and in the book, this was a unique one, altogether. The concept, though was an old one, the way the story was narrated makes it captivating till the end.

The combination of Sci-Fi with historical characters was deadly. If you are a lover of the above genres, there is no doubt that you wouldn't be liking it....