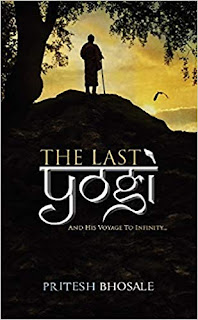 The Last Yogi is a dream come true for the author since he had this in his mind from 2010 and after few years of struggle, he finally got it published in paperback form. The gist of the story is simple but the way it was portrayed, makes it an interesting read.

This has some resemblance of a Hollywood movie but having said that, this is set in the Indian sub-continent and would surely get the attention of fantasy lovers. The protagonist of the story, The Last Yogi is Arpit which translates to "Offering to GOD". He has to leave his parents when he was 8 due to a promise made by his parents to Swami Brahmananda.

What was the promise all about?

The story is set to be happening during the period of Kali Yug where in Kali poisons the mind of King Kalyavana. When every hope seems to have been lost, The Last Yogi emerges.

What is special about him?

The story is narrated in such a way that you would not stop reading it, once you picked up the book, until you finish it. The sequences were narrated in a real interesting way. Arpit gets to meet Jayraj, The Lion King, Vajra - King of Gypsies, Niramaya - The Royal Astrologer, Meenakshi - The Yaksha Princess who all plays a vital role in helping him in some way or the other. He also gets a magnificent Stick, Nectar of Invisibility to assist him in his mission.

Read this captivating novel which surely would make you feel fascinated.