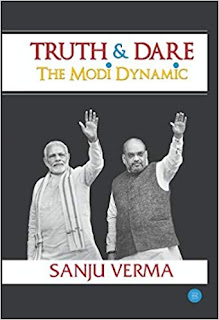 How many of you agree that India is really changing under the Modi-led government? Many agree, many doubt or get incited for debate! Well, the fact is that our country is indeed changing under the leadership of Shri Narendra Modi, who has been elected PM twice, back to back. To support my point, I would like to discuss this book, Truth & Dare – The Modi Dynamic, of Ms. Sanju Verma. She herself is a famous BJP spokesperson, and you can often find her on TV channels.

Coming to the book, it basically is bifurcated into two sections, the first one discusses about Modinomics, and second one focuses on the genius of Amit Shah’s in making BJP as the best and leading political party in India. Modinomics has become a generic idea and people from across the world have begun recognizing it for various development models.

To gain deep and fruitful insights about as what is Modinomics Unplugged and how it is beneficial to every citizen of India, one must carefully go through the book. After the forwards, the very first chapter – The Vibrant Gujarat Model of Development – talks about the rudimentary economical aspects that work in the building of Modinomics. It is stated that the roots of Modinomics belong to the Gujarat model.

Next, you will get insightful chapters on 10 percent GDP Growth Trajectory, Demonetization, GST, The Empowerment Tool such as Aadhar and DBT, and great portrayal of Make in India, Startup India, Mudra, The Modi Era and Fiscal Prudence, Ayushman Bharat, and much more.

The author has done commendable research on datasets and stats. It’s possible as she herself is an economist. Otherwise, many other books on Modinomics just talk about shallow waters. This one has particularly taken pains to guide curious readers by providing multi-dimensional facets.

The second part of the book is rather short and it discusses the rise of BJP under Amit Shah and it also highlights some other issues that often go unnoticed by media, like discussing Article 35-A and UCC, a look at the issues of minorities, Kashmir problem, Mission 2019, etc. It is surprising to note that in Mission 2019 the author already predicted that BJP would win over 300 seats, and it came out as raw truth on the election results day. Other than Modinomics and various policies, the book is high on stats, data, and credibility and does not miss to discuss the deadly Pulwama Attack of Feb 14, 2019.

The book can be bought from Amazon