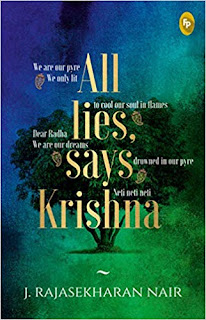 The two great Indian Epics has been written and re-told in many ways. Each one of them had their own and unique way of approach to the epic. We would have also seen them on television in various versions. However, All Lies, Says Krishna is certainly the one you wouldn't have come across. There are so many reasons to it. One of the main reason is the story is told by none other than Lord Krishna himself to his lover, Radha. Yes, The Lord is instrumental in giving out "Bhagavad Geetha" to Arjun but the narration of the epic itself, in his version is something unheard of.

The story may not be appreciated by the orthodox Hindus as they may beg to differ to this version but we must understand one thing that there is no concrete evidence or proof about the happening of the epic, as has been told to us, over the period of few centuries. I appreciate the different outlook and approach to the epic by the author which in itself is a daring attempt.

I will not be going in detail into the story as it would become a spoiler. However, I would like to give few instances as to why I call this novel, unique.

1. The story gives great importance to Draupadi who along with her twin brother had planned to take revenge against Drona and Arjun. You read it right, it is Arjun...
2. Draupadi had actually fallen in love with Lord Krisha.
3. Lord Krishna never thought Arjun would make it to the Syamvar since he wasn't invited.
4. Draupadi felt humiliated to be sharing her life with 5 brothers - Pandavas.
5. Lord Krishna's parent is a sibling of Kunti.
6. Pandu was impotent but he concealed it while marrying Kunti.
7. Pandu falls in love with Madri and reveals the secret about him.
8. All the 5 brothers except Yudhistir married once more since they were deprived of sex(as their turn to live with Draupadi would come once in 4 years)

There are lot more to add but like I said earlier, it would be a spoiler.

This is a daring attempt by the author who has given a different perspective to the epic which coincides with the events in some way or the other and would definitely make one think more than once as to why not these could have been the actual reason/cause for the epic to have unfolded in the way, it wasn't suppose to be...