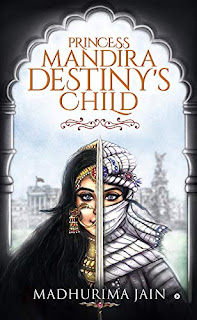 If you have ever been searching for a character which is equivalent to Bahubali, but portrayed by a female protagonist, Princess Mandira would aptly fit the bill. Trust me, when I was reading the book, the portrayal o the Kingdom, The Princess made me stunned and astonished as Madhurima has brought the sheer brilliance of magnanimity through her writing. I wouldn't be surprised if this is been made into a multilingual movie with the lead role being doned by none other than Anushka Shetty herself.

Coming to the review now. This is the first part of the two part series(prequel) and I thoroughly enjoyed reading it from the beginning till the end. King Raghavendra aka Maharana ruled HinduKush kingdom. He had eleven wives but one who was very dear to him was Queen Serenova. As the name suggests, she was not from India. When she delivers the protagonist, Princess Mandira, she dies due to delivery related complications. King starts hating her and so as the other wives(step mothers) who wanted to get rid of her.

Luckily, the baby gets saved by Raj Guru who appoints his better half Geeta Bai and his own son Nathu as her care taker. She was taken away from the palace and lives in Ashram. Though she was away from the Royal Family/Palace, she was taught all the arts including singing,dancing,cooking,fighting,politics,drawing among others. Though this was done in order to save the Rajput royal family from falling into disgrace, destiny had other plans.

Mandira who turns out to be a beautiful Princess when she grows up had to marry a person who comes from abroad.

Why did this happen?
Did she face any consequences after her marriage?
Was she made aware that she was a Princess?
Who married her?

All your questions will find the answers in this beautifully portrayed novel which will give you goosebumps. The character started living through my eyes right from the birth till the end of the story and would continue to live since there is a sequel to it :-)