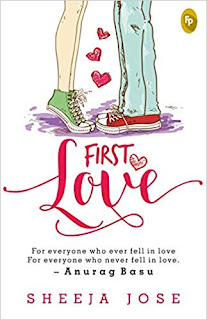 A classic story which would take you back your teens. You may or may not have experienced the phenomenon called "LOVE" but this would rekindle the memories of your past. They say that the "First Love" is always special and remains etched in the memories forever. This is what happens with the protagonist Tina, only daughter of the single mother Rachel.

Tina was a happy go luck girl. She had her friends circle and was quite popular in her apartment complex Daffodils. The name Daffodils remains special to me as my first blog which still functions was called - daffodilstouch).

Coming from an affluent family, he has this attitude in himself by default. He ridicules Tina. However, Minu, Adi's sister likes her. As they say, "Love is blind", Tina starts loving Adi but Adi who has dated many girls like Dia, Shruti, Riha never approved of her love though they had sex.

This book is straight forward in establishing the fact that there is no need to be ashamed of Sex and it would be good,if it is discussed with the parents. Of course, not everyone would take it the same way as Rachel. On the other hand, if it is kept hidden, it would invariably lead to lot of consequences.

The story is set during two timelines - 2012 and 2016. While Tina keeps failing in impressing Adi, she tries to make her single mom happy in all aspects. What she does is something revolutionary. She gets enrolled in tennis class and Rohit who is Tina's tennis partner, falls in love with her.

What happens to this Love Triangle?
Who emerges successfully in the end?

Read this beautifully portrayed novel which would keep you captivated till the end.