Book Review - I-SPY : A peep into the world of Spies 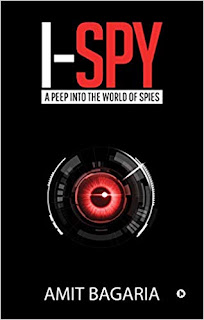 Penning a non-fiction isn't easy. It needs lot of hard work and determination coupled with extensive research and application of mind because you cannot afford to give an incorrect information which may backfire against you. Amit just did that. All his previous books including this one is that of non-fiction genre and he has mentioned it in the very beginning of the book that it took thousands of hours of extensive research. He has sourced these information from various places and given it to us in a single book which certainly needs appreciation/applauds.

You can decide about reading all of them in one shot, one by one or you can also skip some of the organisations, if you do not prefer to read about them. This wouldn't affect the continuity of the book as each and every chapter is unique and is not connected with the other. Of course, in reality, they may have worked together on various projects and let us not go into that.

You would be surprised to read that not all the Spy organisations are well funded and despite facing the cash crunch, there are few who has excelled in their work. Needless to say, CIA is one of the top funded organisation and their budget exceeds the overall budget of many smaller nation. This isn't a surprise for the fact that they try to assert their supremacy all over .world.

I was delighted, stunned, surprised reading about various organisations. So, I could say safely by even without having a second thought that it has satisfied me in all the aspects - be it with content or otherwise.

I also must admit the fact that despite of having an opinion that I knew about most of them, when I finished reading this book, I realised that what I knew prior was not even 5% of the content that was covered in this book. Hats-Off to the author for such a great attempt and he surely is an author who differs from other and yes, he is on a Mission!!!

This book is available on Amazon and also in leading stores, offline.