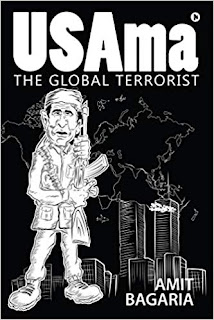 I have read Amitji's other books. His knowledge is beyond comparison especially when it comes to International/National Politics. Part of it may be attributable to his studies and the work he did, as a student in USA. This book is a testimonial to his knowledge.

The content in this book is the outcome of a very well researched activity. I felt like watching a thriller though the book is a non-fiction. Though the book is bulky(close to 500 pages), you would never feel that you have been over burdened with facts and figures. This is because of the way, the content was being presented. The flow of content coupled with evidences sourced from various magazines/journals/newspaper would send a chill through your spine.

The fact that this is the 10th in a period of just 1 year shows the amount of hard work put in by the author in researching the subject and coming out with a well written book. I am sure, if you have read any of his previous books, you would certainly not beg to differ from my view point.

What is in this book?

This book contains some shocking revelations of what has been done by the USA in 80+ sovereign nation. The fact that many of them are hardly even connected with the super power, in any way, be it politically or economically would certainly make you to think twice, if not more, as to what prompted such a kind of action?

While, the general public of USA is not even aware of most of these instances and majority of them were even against the actions proposed or taken by the USA, the way they exercised their influence over various forms of Govt be it Dictatorship or Communism certainly drives some valid ;points which has been discussed in great detail by the author in his book.

Do not miss it, if you want to know the truth!!
Remember, you may or may not be knowing all of them which has been discussed in this book in great detail.

This book is available on Amazon and in all leading stores, offline.