Raksha Bandhan is always special especially when you have a Sister.  It is this day which reassures the sibling relationship, though it is felt and experienced almost every moment. Initially, I never believed in a day which is specifically dedicated to celebrate any function/relationships but then I realised that it is a pre-requisite, for the fact that one could at least show the other person, that he/she is been important in someone's life.

You may be different with your thoughts but you cannot expect the same from the other person as well. Thankfully, I realised this much earlier rather than not realising it at all or realising at a later stage. I have seen lot of siblings who show their affection on Raksha Bandhan. I too have few memories from the past which I would like to share.

Raskaha Bandhan isn't a festival but is much more special than that. It is a day, where there is a contest between the brother and sister who would try their best to prove as to who shows greater care over the other. This is a healthy contest and shouldn't be overlooked. When I was a kid, I realised that I have a greater role to play in the life of my younger sister, as and when she grew up. 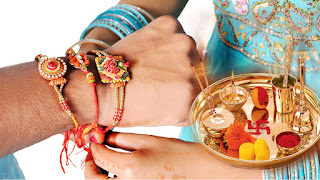 My sister always had the habit of gifting me something which she had done it herself. It included Rakhi, Greeting Cards etc and I always use to wonder as to how she could do it so beautifully and how much time was required to get the creation done. Not all would be lucky as me. Yes. There are lot of siblings out there who live in different parts of the world due to various reasons. This can happen even before the matrimonial alliance is struck. Education may be one of the major reasons for the separation but fret not, you can send Online Rakhi Gifts for Brother, with ease. Distance isn't a problem, any more.

Coming back to my story. I was surprised on many occasion when my sister gifted me something during Raksha Bandhan which I had never thought about even in my wildest dreams. Most of the time, the gifts weren't expensive(in terms of monetary value) but it is invaluable because of the time spent on that creation and the personal touch given to it. Those cannot be compensated monetarily but yes, I always felt blessed for having been given such a caring sister. What I gifted her back in return?

I always gifted her something which she wanted at that point of time.

She was a hardcore fan of an actor back then. I gifted her, a special magazine of that actor, once.
On another occasion, I gifted her a Silver Anklet.
On one of the Raksha Bandhan, I presented her with a beautiful watch.

The above was possible because even till today, we stay nearby (she stays literally on the next door) but there are not so fortunate siblings who would stay miles apart. With technology coming into picture, you can send Personalised Gifts For Raksha Bandhan anytime, any day, to any place.

When I say Personalised Gifts, it can be any of these following categories which includes and not limited to:

I am sure that you would be able to find a suitable gift for your sibling, with ease from any one of the categories mentioned above as it covers almost everything, you might ever think of gifting.

So, next time, even if you are out of the Country, you need not have to worry about sending gifts to your sibling. You can Send Rakhi Gifts to India with a click of a mouse. Distance wouldn't be an issue, any further. Celebrate the day, as usual. Happy Raksha Bandhan!!