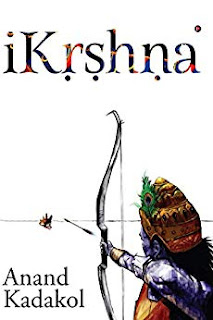 There are hundreds and thousands of books out there which talks about Lord Krishna and his role in Mahabharata in detail. I have read few of them myself and have dwelled in the contents deeply. Each one of them had never failed to fascinate me. As an avid book reader, I was always in search of the book which gives a different dimension to the story.
While no one can deny that history cannot be changed, what could be done is to have a differential approach to the same. While some say the story, itself is a myth and for an atheist, this is totally irrelevant, I am not going into those discussions because I believe in GOD and I believe it firmly.
When I saw this title, I was intrigued about the uniqueness of the title. I knew that there is something different about this book. I was not wrong. As soon as I read the introduction/preface, I was thoroughly convinced that I am set to begin a different and fascinating journey altogether. The uniqueness of the approach to the story, moved me a lot.
The story does not glorify Krshna portraying him as a Super-Being but as a human being who had a destiny and a calling to respond to, who performed some extra ordinary acts through his wit, presence of mind coupled with the skills he  learnt and mastered through his sheer grit and dedication. He was trained by eminent in the respective fields and He along with his elder brother Balram had mastered lot of skills in the field of Archery, Wrestling, diplomacy among others.
The book covers all the aspects of Krshna, the Protagonist covering his life from his Birth till His end narrated in his own words.
The beginning of the book surprised me. I haven't seen this kind of beginning in a story, it is very unique and it hits you from the first page. This makes the book, a real interesting read because not many have undertaken such an approach. The way the characters were portrayed, the scenes were explained coupled with expressions and emotions made me feel that there wouldn’t be a much effective/better way to bring out a story than this. Kudos to the author for the great attempt which has left me with no appropriate words to praise.
The happenings and events in the book transport you to the scene. It feels as if you are part of the event and it is happening all around you, the narration is very visual.
I am not going into the story or the content here as we all knew about the epic since we been told about this over a period of time on various forms – be it in books or through audio/video visuals. The book surely gives a different dimension to the story as it talks about the epic in a believable way. It made me to deeply ponder over the thought that if it had been done centuries ago, this probably would have reached much more people than it intended to be….