Being a Sous Chef for Vicky Ratnani

If you are a foodie, you certainly wouldn't want to miss catching up with Masterchefs especially when they come to your place for an event. This is what happened with me when I came to know that Masterchef Sarah Todd would be visiting VR Chennai along with other celebrity Chefs Vicky Ratnani and Saransh Goila.

Sarah Todd is known for her quick preparations and had cooked Aloo Gobi in Masterchef Austalia whereas Saransh is famous for introducing Butter Chicken - his brand "Goila Butter Chicken" to the West. Vicky needs no introduction. I saw the posts made by Kiran Soans promoted "World On A Plate" instagram page about the contest and took part in it immediately. As luck would have it, I was announced as a winner for couple of events - "Judging the Dish" prepared by the Chefs on their face-off challenge and "Sous Chef for Vicky Ratnani". This came exactly at 9:30PM, the day before the event with just less than 12 hours to go as the event was slated to begin at 9AM at VR Chennai. I hardly could sleep that night.

Next day, I promptly reached the shopping centre - as it was called so and not as a mall by the VR Chennai centre head Ms. Natasha Soni. The Chefs arrived at 8:45 and after some photo shoot across the property, they proceeded to the dais. The stage was beautifully set and the gathering were excited about seeing their dream chefs in person. We have been tied a tag so that we could get access to the VIP Area. We were also told about the itinerary in advance. There was also a sale of souvenirs which were priced at INR500. The celebrities autographed only on that which is a good move since all the proceeds including that of the event went to HUG Charity promoted by WOAP of GoldRush.

There were 15 under privileged kids who were brought to witness the event and some 15 of us - bloggers & influencers were paired with each to facilitate the judging the best dish. We were given 3 score cards each to give our ratings. We were told not to influence the kids about the rating. 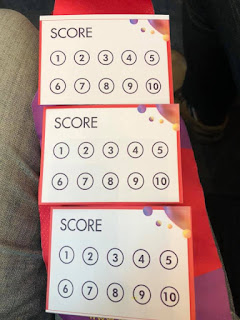 The Chefs happily obliged to autograph and pose for selfies with them. 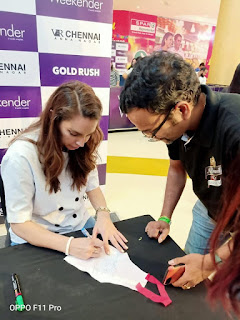 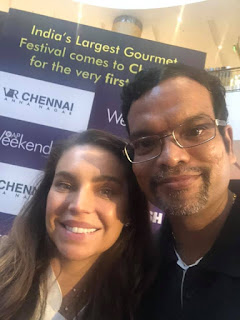 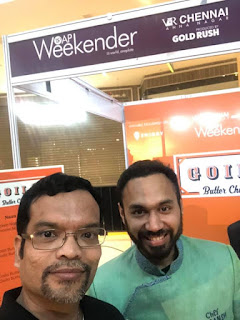 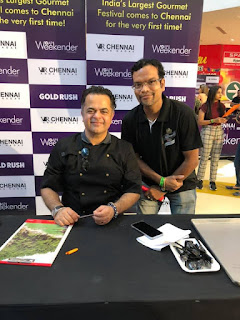 Finally, it was show time where I was the Sous Chef for Vicky Ratnani. He asked me as to whether I am prepared to be the Sous Chef for which I answered YES. I witnessed his wits firsthand on the stage. He is a thorough professional who doesn't get distracted and cooks perfectly well. I assisted him in grinding the mix, making the balls by frying them on the pan. Finally, he said "I'm Fired!" since he asked couple of younger chefs(kids) to take over the mantle for me.

All I can say, it was such a memorable day wherein no one felt fatigued or bored since there were back to back events which included the performance by a band and Masterclass with Chefs who were brought from some of the major restaurants in Chennai. It was a feel good experience and experience of a life time...