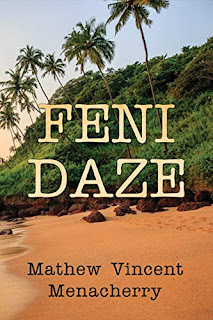 A feel good book that would take you inside the life of the Protagonist Victor Gabriel aka Vic. When I say feel good, I meant the emotions I had undergone while reading the book. It is not that the story was all about good things but the way it was written would make you feel so. I still remember as a kid, when I first heard the word, F-E-N-I, I was fascinated. The name was different and so as the sound. I then came to know from my dad that it is a famous drink which was available only in Goa back then. This was in early 80's. Ever since, that name got registered in my mind. My readers by now would have probably known that I am a teetotaler but that did not stop me from clicking pics or even having the miniature souvenirs of them at my home. I even had a couple of opportunities to go to Goa to attend couple of events but those did not materialize due to natural calamities and some other reason.

Coming to the story. The story juggles between the younger life of Vic and the present one. Each one was interesting in its own accord. While the younger one talks about the trouble he face having a drunkard father, the present one talks about how he found it difficult to land a job initially(after getting discharged from the Army) and his equation with Ana. The younger Vic was more aggressive though his physical stature did not augment it. However, the sheer guts he had made him to do some acts which landed him in trouble. This is something which would connect with most of the school going kids since they would have either been involved themselves or come across such a character in their life, for sure, at least once. There was fire, speed, courage, anger - all bundled in one package in the younger Vic.

As he grew, he understands the nuances of life and when he meets Ana, things take a different turn. There were few other characters as well which includes John, Jazz, Marge, Aarti, Uncle Joe to name a few. Each one was given a due weightage. There were references to Bengaluru and Mumbai. Having lived in Bengaluru for 8 years and being half mallu myself, I could get few things with ease and not forget to mention, I did not fail to notice the tinge of sarcasm in Vic(again thanks to my ex employer who was an MNC through which I interacted with not less than a million Brits who are known for their sarcasm).

If you love the story which also has a mix of dialogues coupled with some reality which takes you into the scenic beauty of Goa(where the majority of the story was set), you would surely love this book. To refresh your memory, like I said earlier, this is a FEEL GOOD BOOK!!