1
Welcome to Sarath Babu's Lifestyle Blog Book Reviews Book Review - Finding The Gaps : Transferable Skills to Be the Best You Can Be

Book Review - Finding The Gaps : Transferable Skills to Be the Best You Can Be 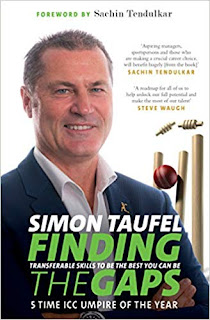 Simon Taufel has been adjudged the Umpire of the Year from 2004 to 2008. The Award was introduced only in 2004. Winning it 5 times in a row is no joke. We may not be knowing the nuances of what goes into umpiring and probably might be of the opinion that they do not have any work other than standing on the field and adjudging the game. If you had that notion on your mind, it is time to change since they do more than what we could ever imagine.

Through this book, Simon Taufel brought out the best characteristics of an umpire. It was written in such a way that it is applicable beyond the boundaries of umpiring. I was lucky to be at the book signing section which happened in Odyssey, Adyar yesterday(7/11/19) and I must say that I was fascinated and surprised by his fitness. We must note here that he has retired from cricket, long ago but the fitness he maintains till date is something one should be envy of. It happened because he was into sport coupled with his own interest which saw him approaching a fitness coach on his own who agreed to share the fitness regime(which was shared only to the players)on the condition that he relayed back his feedback and reports.

His thought process on Interpretation is amazing. He says that "There is no disputing the event was the same, but the interpretation based on how we think and our experiences means that we can see it differently. That just means we need to be respectful of the views of others because they are not right or wrong - they are just different".

I never knew that he was on the bus that was attacked in Pakistan during the Pakistan-Srilanka match and missed the bullet by a whisker. Man, that would have been an horrific day/incident, for sure.

When he talks about Planning, he asks us to make a note so that you do not forget things or conceive it in a different notion, if it was memorized. I do this, all the time.

Talking about Feedback, he wants us to consider or ask ourselves these three questions:

1. Was the source of Feedback credible?
2. Was the feedback valid and relevant?
3. Did the person giving the feedback have my best interests at heart?

How valid and true these points are.

He also goes about saying as to what he asks himself when it comes to the game "I can umpire well, I will umpire well, I am going to umpire well". It is these kind of notion which has kept him on top of his business. I was also stunned when I read about his knowledge of counting up to number 6 in Seven languages. As we know, the maximum runs one can score in the game of cricket is 6 and so as the number of deliveries in an over. He wanted to make the players feel well by conversing in their local language. It is to be noted here that when he came for book signing, he said "Vanakkam" and "Namaste".

By mentioning that "it's important to not forget where you came from, nor to forget those who have helped you along your journey", my admiration over him has grown manifold. It was stunning to know that the New South Wales Cricket Association has produced 12 Australian Test and 84 First-Class Umpires over the past 105 years. Simon also spoke about his personal life as to how he depended on his neighbors especially when he was touring abroad which showed his humble side.

His worst ever Test match was the match between England and Newzealand in 2004 where he made 6 incorrect decisions. He was gracious enough to accept his fault and man, he went on to become the greatest umpire for 5 years since then.  He says that after spending 23 years in the cricket field, I am not the perfect umpire. How many have said this before?

He also spoke about how he made the Local Umpires understand that they are no different from the ICC Panel of Umpires and there is no "Senior" or "Junior" as they all wear the same logo an represent the same team.

The ICC PCT Code for Umpires on HONESTY was something new to me.

He has talked about few players in his book which includes Virat Kohli, Virender Sehwag, Brian Lara & Bevan, Mark Taylor, McGrath, Mahela Jayawardane and Inzamam. There is also a reference of Mahatma Gandhi.

His reference to Mark Taylor's score of 334 and declaring the game as he considered the game's end result on priority rather than his own personal record showed how some of the great players sacrificed for the sake of the game.

There are Key Summary Points at the end of each chapter. All I would say is author through his rich experience has brought out a book which would hold good not only for the game but also for the general principles in Life.....

This book is available online on Amazon, Flipkart and Offline on leading bookstores like Odyssey, StarMark, Crossword etc.,