Book Review - With Ash On Their Faces 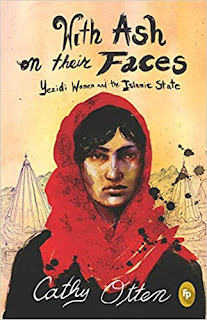 This book is a first hand account of what is happening in the war-torn areas of Iran, Iraq, Syria and the surrounding areas. Cathy Otten has done her best by recreating the stark reality through her book in the form of short stories. She has reproduced the incidents which she had come across during her career in journalism. Hailing from Britain, she is based in Iraqi, Kurdistan and has come across some of the reckless, frightening and harrowing events and experiences.
There are many books written about wars and the after effects. These were mostly based on African nation or elsewhere but for the first time, probably, a detailed account has been created/documented about the happenings in Kurdistan where the war is a daily affair.
I felt sorry for the characters – the names were changed since it might intrude on the privacy of the real ones. The bad state of the people would bring tears in your eyes for sure. There isn’t one but there are hundreds and thousands. We were given to read about a few only but this is itself is a conclusive proof about the sheer brutality of the organization which has unleashed horrifying experience over the set of people.
The book mainly focuses on Yezidi people who were dislodged due to the ongoing war in most of the affected areas which has seen them being diminished as they lost their fortune and belongings. Most importantly, many of them had even lost their identity. Some were forced to convert to Islam. They aren’t the only ones who got affected but also the Kurds and the other public in general. Others weren’t affected as much as Yezidis which I am not sure whether it is a curse of being born there or born in as a Yezidi.
Human trafficking is at the peak especially in areas like these. Women gets kidnapped and even the official account puts it up as high as 3,000+. Men were murdered. Kids were tortured. This would make you think whether we live in a barbaric world? We might also be wondering what is UN and Human Rights Organization is doing when it comes to drastic situations like these.
Each and every chapter is a powerful record of the reality which is intense and yes, it is appealing and most importantly would surely make you to pray for the people who are affected…..

This book is available on Amazon in Paperback and Hardcover formats.