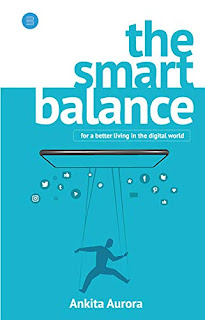 This book is the need of the hour since it talks about how the world has evolved due to the evolution of Technology and how we embraced them so much that we have almost become a slave to it. If the word SLAVE makes you feel bad, let me say that you have become an ADDICT! I am no exception but the only difference is, I make money out of it, since this is my profession. I do not want to be rude but to put forth the reality which is precisely covered in this book, in great detail.

The outer cover of the book is pretty much obvious and establishing the fact that we have become a puppet in the hands of gadgets. I don't think it could have been portrayed better than this. So, kudos to the designer who did this, thoughtfully.

Coming to the content in the book - There are so much of them that was covered with an in-depth analysis making it an interesting read. Some of them, I was aware of and some - were new to me. In fact, they were scary as well. The intention of the author is pretty clear. She wants to create an awareness, through her book. She has written the book so well that it almost felt like a fiction novel. The contents were fresh, interesting and inviting. I use to take notes in order to write  review, after I finished reading the book but realized that it was way too many for me to put it over here. There was also a mention about Influencer Marketing which made me feel better. The books talks about Dr.Google and those who use or search for information there, knows what this term means.

There are few charts that were used in various chapters. Do not skip them since they convey a greater/wider meaning which is as good as the entire chapter. Also there is an Appendix in the end. Do not skip/miss it since it is also helpful in evaluating yourselves.

There are few power liners and information, I would like to mention here(these were quoted from the book):

McNutt "These days we have Smartphones, Smartcars, Smartboard, Smarteverything, but consider this if the technology is getting smarter, does that means humans are getting dumber?"

Do you know that Netflix had a greater revenue than the Malta's GDP in 2017?

Do you know what is Roach motel technique?

Do you know what Oobah Butler did in November 2017 which went Viral?

Why do we check-in where ever we go? It is an irony that there is a check-in even when someone returns to his/her own home and on worst case scenario, there are check-ins, even in the restroom. Seriously?

How many of you know your virtual friends, in real?

When did you last speak to your cousin over the phone or wished him/her direct instead of sending  message on WhatsApp, FB etc?

Don't we send a WA message when the person sits next to us or in the next room?

Well, there are more such cases/revelations. Thankfully, author has tried to answer these / give a solution to most of the problems. It is up to us to diligently grasp these and act on it. I found this book, a real helpful one and would conclude that this is a MUST READ since this book is written for our well-being.