Book Review - Love On The Everest : Love Conquers Everything 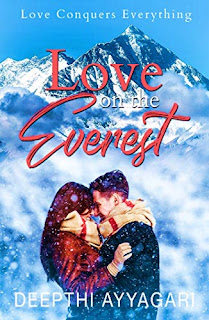 A short novel with an intense content. The story gets the pace slowly and gradually. The title would give you a hint on what you could expect in the story but yes, the characterisation was perfect since it has captured the emotions in such a way that you wouldn't stop falling in love with them.

We all do know that it is Sir Edmund Hillary and Tenzing Norgay who has conquered the summit for the first time but we do not know whether their predecessors George Mallory and Andrew Irvine had made it to the top, almost 3 decades prior(1924 was the year but we have no evidence or records to prove it). This is something I had learnt after reading this book.

Sherpas are the tribe who live in Himalayas whose body condition are naturally acclimated to the weather conditions, altitude and physical stamina that is required to climb the mountain.

In general, most of them are men(who accompany the trekkers) but there are Women as well and they are called Sherpanis.

The Khumbu Glacier is a stretch of 17 kilometers of ice, which is known to be shifting and melting all the time. This is the challenging part in the route to summit Everest.

Chomolungma is the Mountain Goddess.

One of the notable feature in the story is the poem which is written by the author in her book Dandelion. I liked the poem very much since I myself was into writing poems, once.

It is necessary to use the oxygen supplementary when you were to ascend to. The peak is just 1000 metres from there. This is also considered as the Death Zone.

Coming to the story. Siddharth, the protagonist hails from a very rich family but he was not at all interested in looking after his father's business. Right from the childhood, he was fascinated by the peaks and wanted to climb Mt.Everest. He gets an assistance in the initial days from his grandfather but after he passes away, things get difficult. He was forced to get engaged.

He meets Dohna who was his climbing partner.

Did Sid makes it up to the Peak?

Was there something interesting or we may call it a twist in the tale?

Do buy and read this book to get to know about it because it is certainly worth your time and money. It would even more appealing to you, if you aspired to climb the tallest peak in the world, at least once in your life. I did had that inspiration once and my life was more or less similar to the character of the protagonist and hence there is no wonder that I fell in love with the story, instantly.