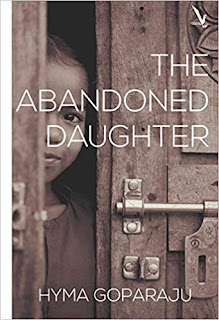 Though this book is a fiction, the intensity of the story that takes you back to the pre-independence era makes you feel as to how it was, back then especially when a girl child is born in the remote areas wherein the local landlords aka zamindars enjoyed absolute power and none of them even dared to challenge them despite the ruling British Govt passing strict laws with regards to various measures from time to time.

The story revolves around Gomti Devi who was probably the gory face which no one would want to even remember. Imagine that there would have been hundreds and thousands of such characters back then which had literally turned the otherwise beautiful life, a nightmare, for their daughter-in-law's. She had 4 sisters. Her mother dies young leading to their father remarrying and the step mother was successful in delivering 2 sons. Though she has not gone much struggle in her life, this left an irreparable mark which reflected in her hatred towards her Daughter-in-Laws since none of them managed to deliver a boy baby.

The characterization of Munni was spine chilling. She was involved in killing the female infants. There was Champa Devi, who was a mid wife. She was much better compared to Munni since she never indulged in killing the newly born babies.

Gomti had 7 sons. Her favorite being Kulbhushan who was married to Tulsa. The other Son Kishan, who is considered the most diligent among all the sons was married to Phoolvati, the most beautiful lady in that region.  Then there are other daughter-in-laws Durga Bai and Basanti. There were other characters like Kalia, Natthuram, Obalesh, Babulal, Pyareh, Bhdur and Gabar.

Gomti wielded absolute power in her home. Even her hubby Dharampal never uttered a word. Her other sister Gomra Devi joins hands with her and they hatch some of the most barbaric and heinous crimes which would send chills on your spines. Even such a ruthless lady like Gomti kept getting some nightmarish dream involving a character called "Narayani".

Who was she?
What is the story behind this?

You definitely need to be strong hearted to read this story because it gets real intense as and when the story progresses. The characterization was done so well. Writing style was unique because it kept the intensity intact throughout the story making it a compulsory read.