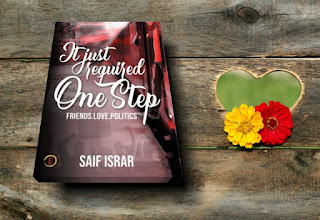 It Just Required One Step is a general fiction at a first glance as its cover page gives hint about friends, love, and politics. These topics are considered a general topic of gossiping everywhere in India, especially in North India because of politics. However, a closer look reveals, as you can say when I completed reading it, the novel shuttling mainly between silent romance stints and political chaos.

Broadly putting, as per my grasping, I understood the novel an entity of romance thriller. How? Let me expound it. Samar, the lead guy goes to a college in Allahabad to have a degree in law. In the college library, he stumbles upon a ravishing beautiful girl Nupur. She loathes him initially. But as it happened out that they both are from the same city. Chances are bright, as they happen to meet during train journeys. It’s and bits and they become just friends. Samar begins love-like feelings for the girl. On the other hand, this open-minded girl opens up with him, I mean quite frank, the guy carrying sanitary pads for the girl.

The second side of the coin is that Nupur is already in love with Sharma, a vice president of Hastings University Union (HUSU), and friend and roommate of Samar. Here lies the criss-cross point. Somehow Samar still keeps his feeling alive for her, though not so vocal about it. Sharma is casual about the affair, and due to politics background he is powerful and rich. Samar is hardly any middle-class. And above it, Samar gets acquainted with Arun, one of the fiercest rivals of Sharma for the college elections.

Now you got the point. The novel is not just about love but also about proving superiority in the campus. Samar didn’t like the celebration methods of Sharma, thus to change things he joins hand with Arun. But things politically turn awful and in that heat Samar struggle for Nupur’s love becomes tough. Though during the protests, which luckily owing to the power of social media, something like JNU, Samar gets much recognition as well as defame. Due to some actions which he was not at all faults; his name becomes dark before Nupur. She begins hating him and finally ignores him.

There is both gain and loss of love for Samar. But probably, at times, it seemed as he could not manage it properly. I don’t know why, but I felt that his character was like that, shy and introvert, not seeking advice from anyone. Well, say anything but he was daring and has had guts. But was it all worth? Did he win his love of life? For these answers to be known, you must pick up the novel.

On entertainment stance, I enjoyed reading it much better than other romance writers. However, at some places, I felt as the political angle was overdone. Romance thriller lovers will definitely have a gala-gala time with this novel. Fantastic way of narration along with lucidity makes it a novel to savour.

This book is available on Amazon and other leading online stores.