Book Review - A Tryst With Mahakaal 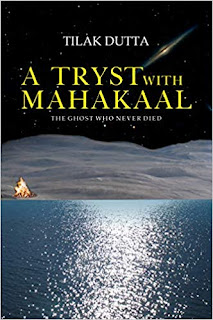 
One of the stunning books,I have come across in recent times. I was told that this took 6 years for the author to complete. When I read it, I understood as to how much of work had actually gone in since it is reflected in each and every page. At times, I felt like as if I have been reading a non-fiction because the story sounded too good to be real. The novel is divided into four parts:

Leela is the protagonist and she gets attacked by some unknown miscreants. Why would someone want to attack an woman? This is when she starts digging deep into the events and unearths few clues. This leads her to her cousin brother - a prodigy who is none other than Bharat.

Bharat whose story is covered in detail in part two was celebrated for his genius but soon after he vanishes from the public domain but emerges back in a lesser known place called Pritak Ghati. He turns it into a model village. He was inspired by some one.

Mahakaal happened to be a mysterious character. He is the one who saves Leela when she was attacked. He is the one who appears before Bharat as Santji. People believed that he is none other than Netaji. However, records said that he passed away in 1985. How did he manage to come back alive after 2-3 decades and that too as a not so old being?

Prapti unfolds all the mysteries in the end.

The book is a bulky one which runs close to 400 pages but trust me, you would love each and every page for sure since the way the story was penned would keep you captivated. The writing style is certainly different from the other authors and you will not feel bored at any given point since the sequences were designed in such a way that it keeps you guessing... A Must Read!!

This book in available on Amazon in both ebook and paperback formats.