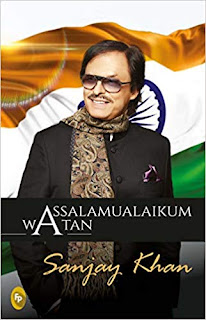 
The title Assalamualaikum Watan by Sanjay Khan is certainly a catchy one. Firstly, I loved the cover since it had his picture with the Indian flag in the background. I had a hint of what the contents of the books with the title and the author. I was not wrong.
The book talks in great detail about the Muslim community and their contribution to India and the World. If you ever had any wrong perception/notion about them, it would change for sure, after reading this book. I have always lived with Muslim neighbors, friends and tenants in my surrounding and hence they were an integral part in my life.
Author is very clear with his intentions. He wanted to be a messenger of Social, Moral and Ethical ideals. He shows the stark reality about the meagre representation of Muslims in the Lok Sabha which is pegged at 4.95% in 2019.
I got to know more about him as to what was the trauma he has to go through during the fire accident in the sets of "The Sword of Tipu Sultan". He survived 65 percent of the third degree burn at 47. His fond recollection of his then meeting with Shri Narendra Modi, then the CM of Gujarat and his subsequent interactions with them were well explained.
I loved the writing style of this great personality who gave his best in the field he has ventured, be it small screen or big screen or the hospitality sector.

There were lot of things I learnt through this book. Some are given below:
Do you know who brought various forms of crafts and industries from Iran to Kashmir?

Do you know who set up the World's oldest University?

Do you know what was the percentage of Hindus who served during Emperor Akbar's reign?

How many names out of 95,300 names mentioned in the India Gate, DELHI were of Muslim?

Do you know the specialty of the village Khera Sadhan?

Do you know who built the first mosque in India and when was it built?

He has touched about various subjects at large which includes other communities like Parsis, Bohras, Sikhs and Khojas. He has also dedicated a special section for Women as to how they excelled and what are the ways in which they are suppressed?
The book also details out about the achievers from the community in various fields like Azim Premji, Yusuf Ali, Shahnaz Hussain, Farah Khan Ali, Zarine Khan, Jawed Habib, Irfan Razak etc.,
It is high time you picked this book because you not only get to learn more about the author(this book has some of his rare collection of pictures as well) but also about his views which are no way biased but is based out of facts and foresightedness.

Hello sir, I am a Mumbai based PR. My client has written a book and wanted to connect with you for the same. Can I have your email ID please?