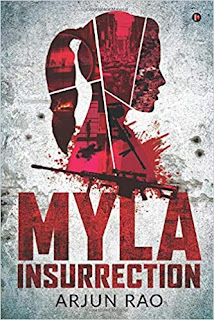 I finished reading this book in one go. You may ask what big deal about this? This is a 316 page book. Considering the size of the paper and the content, it would very well cross 400 pages, if it was printed in a regular size.

By the way, I do not know as to where to start because this book is surreal. I could see the character - the Protagonist - Myla living in front of my eyes. As soon as I finished reading this book, there was just one thought that ran in my mind. This story certainly commands to be made into a movie - preferably in Tamil to start with and the lead role would perfectly fit for either Amala Paul or Andreah Jeremiah.

What is so special about this book?

Firstly, it is the character. We only find a story line, once in a while, that gives prominence/importance to a female lead. Arjun Rao just did that. His protagonist was a female. Having said that, when you complete this book, you would be more than convinced that she did a proper justification to the role.

The writing style was simply splendid. It was captivating. I could vouch this because it held me captive for good 4 hours almost. The story has the element of all that is required to make it interesting. It has a quotient of suspense, thrill, revenge, treachery, crime and what not.

It all begins with a massacre of Myla's entire family.

Who did that?
Why they did what they did?

Though it looked like a dacoity in the beginning, Myla was convinced that this was done not with the intent to rob them but for something else. When she springs into action, the trail leads to a huge network which was span across India.

They had people all over, including the Police department.

Will a single woman be able to take the sheer force/network?
Was she able to face the brutal characters who were behind the assassination of her family members?

Read the story and I am sure you would be convinced thoroughly because there is no exaggeration but at the same time, the character is nothing less than a super woman. Though the story ends with this book, I felt that there is an opportunity to extend it further - a sequel, if the author wishes to do so because as a reader, I seriously wanted one more part to this story which I am sure would be as much appealing and captivating as this book.