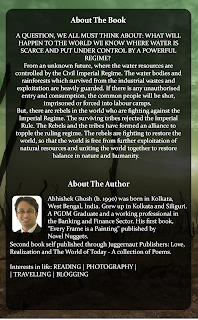 a.    To tell a good story when the lead characters are having a need, along with the obstacles and conflict the character is about to face. Try to solve the obstacles gives me the motivation to write by infusing character arcs to the main characters.

2.    How did you feel after publishing your books?

a.    Great. It feels awesome, having published my book.

3.    What are some of your favourite novels and authors?

a.    Sei Samay by Sunil Gangopadhay

c.    The Murder of Roger Ackroyd by Agatha Christie

4.    Is there a specific reason for naming your novel?

a.    Yes. While writing the story, I didn’t have any title in my mind. But after finishing it, I had few names in my mind but decided on the title, “The Paradise Conflict”

5.    Where do you write from? Do you go to some specific place, like beachside or the hills?

a.    Not exactly. I had my inspiration from the real world issues around the world and took a step further in the future.

b.    For example, 2019 Amazon Rainforest, Water crisis in the developing and the underdeveloped countries, excessive mining in the mountain areas.

6.    What inspired you to write the books(in general)? Any tales to tell…

a.    I have taken inspiration from few notable books in terms of structuring the protagonists and the antagonists from the books, 1984 by George Orwell, The Hero with a Thousand Faces by Joseph Campbell.

7.    What was your biggest learning experience throughout the writing process?

a.    Structuring the story in a proper manner in three act structure.

i.    Introducing the main characters, the world building

ii.    The conflict in the main story and the obstacles

iii.    Resolution to the situation by keeping the characters facing the obastacles

b.    Character arcs to the main characters.

c.    Maintaining continuity to the story

d.    Telling the story with the necessary plot points

8.    Looking back, what did you do right that helped you break in as a writer?

a.    I always have the tendency to tell a story by introducing the character with a complexity and having an arc in three parts.

b.    For example, Mitra was a bounty hunter of Imperial Regime and he is being paid for it. He hates the rebels and also he does not like the atrocities done by the Civil Imperial Regime.

c.    Judy, who is a rebel spy, she killed Jaina to cover her tracks initially, so that the investigation can go on a different. She has a heart to save the world, she feels for the people, yet she had the complexity and the dilemma in her mind.

9.    Any best piece of writing advice that you would like to share with new or struggling writers?

a.    Read more. Understand the writing structure. I am still learning how to tell a better story.

b.    I have written few short stories, with non-linear structures.

c.    Experiment with the writing

10. Something personal about you people may be surprised to know?

a.    I am a huge film buff too. For writing the action scenes in the book, I have read the scripts of few blockbuster and indie movies to write the hand to hand combat and chase sequences.

11. Any future books that you would like to discuss now?

a.    Most probably, I will write a sequel to my current book.

b.    My next book will a corporate espionage thriller, a gritty and grounded thriller with minimal action. More on investigation and character drama.

12. What other profession excites you the most?

13. Any special mention about your reader (be it with reviews/feedback or anything else)

a.    Readers are always, always shall be the lifeline of a writer.

14. Do you write the story at a stretch or you take your time to complete it? If you take a longer time, wouldn’t you be forgetting the story? How do you tackle it?

a.    I write at a stretch. I took six months to complete the First draft of The Paradise Conflict. Two months for the second Draft. Final draft took another six months, after discussions with my editor about the changes and additions.

15. Traditional or Self-Publishing? Why?

a.    Self- Publishing. Because of the facilities provided in the package regarding the copyright.

16. How is the response so far for the book?

a.       Till now the reviews and the feedback by the reviewers are extremely good. Let’s see, how it fares well in terms of sales.

You can check the review of the book here