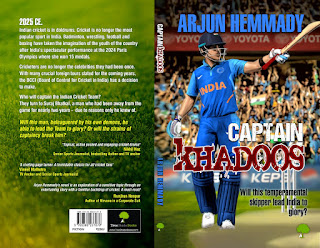 A beautiful novel which would keep you captivated from the beginning till the end.

It all begins with the Captain of the Indian Cricket Team fighting depression. I loved the words “Depression is a disease that is managed and NOT fought”. It conveys such a powerful meaning.

“Never ever be ashamed if you’re suffering from depression. See yourself as a source of inspiration” are the other lines which has found its place in the novel is the Need Of The Hour. This book is a combination of the game - Cricket & a trait which a human finds it difficult to address - Depression.

The story was set in the year 2027 but with some rewind to the past.

These are the important characters in the novel:

By 19, Suraj the protagonist finds his place in the Mumbai Cricket Team & Indian team by 21. Vikrant - Indian team captain

A 360 degree coverage of the life of a cricketer from being no where to become the Captain of the Indian Cricket Team and winning series & championships.

I felt like seeing the life of a real cricketer through this book which would go on to serve as an inspiration for the aspiring cricketers apart from those who are fighting depression.