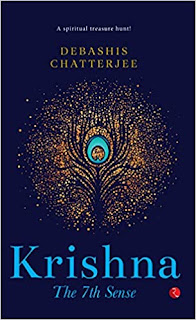 Title - Krishna : The Seventh Sense
Author - Prof Debashis Chatterjee
Genre - Fiction
Publisher - Rupa Publications
ISBN - 978-9355205445
Krishna - The 7th Sense by all means is something beyond our comprehension. Prof. Debashis Chatterjee has come out with a thought-provoking novel which I would say is neither fiction nor non-fiction as it is a combination of both.
Loved the way how the subjects were portrayed. While one part of the story talks about the life of Lord Krishna and HIS life, the other part simultaneously talks about Neel, Kaya, and their friends.
There are other characters like Anju, Prasad, Manas, Eva, Sardar, Prof Jalebi, and others.
The protagonist of the novel according to me is Acharya Keshav Mitra who despite being a Doctorate holder and having worked in a U.S. university, realizes that he is not the usual person he thought of. The enlightenment and the subsequent bliss that followed it for three days made him retrospect the purpose of his life. It is then, that he decides to go back to the land where Lord Krishna breathed, walked, and lived.
The poetic character of Keshav gets revealed of being asked about himself “When the grass cools down and air blows over it, dew drops show up without an invitation”.
Each and every chapter is like a magical discourse that delves deep into the true meaning of life and keeps us captivated until the end (which has a truly intriguing climax).
This book is available on Amazon