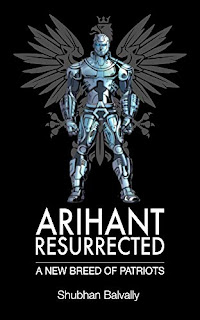 After reading the first book and even reviewing it, I could not stop myself from picking up the second book in the series. Usually, there is a belief that the first part is good, most of the times whereas the sequels won't be that good but this book has busted that myth and proved it to be otherwise. The story begins with a family deciding to travel from Mumbai to Hyderabad.

When they were about to board the train, the station gets attacked. There were so many casualties. Shambhu Yadav, the RPF Head Constable dares to stop them but he gets overpowered. His colleague Shashank Shastry gets killed. None including Sudhakar Pednekar, ASI of RPF could stop them but something unusual happens around that time, with the arrival of an Android.

While the city and the country are aware of the decommissioning of android sometime ago, no one had any clue as to where this has emerged from. While Cops could have a sigh of relief, the press starts blowing it up. This is where Arvind Sinha, Joint Commissioner of Police enters the picture. He requests the CM to allow the retired Commissioner of Police, Mr Anand Rane to be inducted again and head the investigation.

How is Aravind related to Anand?

On the other hand, Deputy CM, Jagan Kalra, Son of Madan Kalra, wanted to avenge his faather's death.

Then there is Hafiz and Zafar from Al-Lashkar and an alter-ego Aladdin. Who is this?

Their place is designed like “Imperial Harem of the Ottoman Empire”. That’s how the author describes the abode of the terrorists. The description in detail shows his level of knowledge and accuracy when it comes to writing a story.

They are now on the prowl in attacking the city by planting bombs and sends a cryptic message.

Did it get decoded?

Each and every aspect which Shubhan described was in great detail. You should read them completely so that you would get the real essence of the story.

You would feel like watching the mix of Bollywood, Kollywood and Hollywood movies while reading this novel which is the speciality.

As the story progresses, it gets even more interesting giving you the tinge of reading a sci-fi novel.

There is more to this Android.

What is so special about this Android?

If you have a kid at home who loves Sci-Fi, they would love it for sure. Read it and you will certainly agree with my perception.